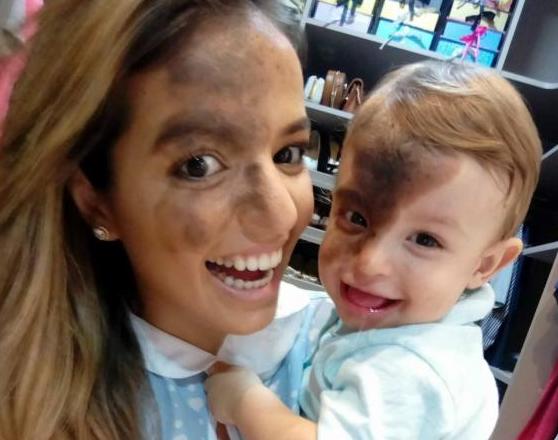 A proud mother got a birthmark identical to her son’s painted on to her face to celebrate her little boy’s unique look and to understand what it felt like to be in her child’s shoes.

26-year-old Carolina Giraldelli from Brazil decided that she would recreate her infant son’s birthmark to teach him that he’s perfect just as he is, and to help him tackle any obstacles he may have as he grows older.

Carolina’s one-year-old son Enzo was born with a large, dark birthmark that covers the majority of his forehead, one side of his nose, and cheek.

Speaking to the Independent, Carolina said: “I confess that for some time it was very difficult to see and feel the eyes of society flickering my son with looks of pity, contempt, scare and sometimes disgust.”

“But even though it is not easy, my husband and I act normally and we will always show him as he is.”

“If someone feels revulsion, curiosity or fear, we try to make him understand that he, despite his mark, is a normal boy who is much loved, just like others.”

Enzo’s mother wanted to understand how her son felt living with the birthmark and so asked her makeup artist friend to recreate her little boy’s unique look on her own face.

She told the Independent that once the look was finished, she felt like the most beautiful woman in the world.

“When I got home, Enzo’s reaction was complete joy – even though he did not completely understand.”

The mother then went to work wearing the makeup, and said though people were looking at her in lots of different ways, she “felt like the proudest mother in the world.”

Giraldelli then shared the images of the makeup online and was moved by the huge amount of positive comments.

She said that she thought “countless mothers had these same feelings when they saw the picture with my son.”

We don’t know about you, but we think that Carolina is amazing and super inspiring for teaching her son about body confidence, and we think her son Enzo is just perfect!

We applaud you Carolina!